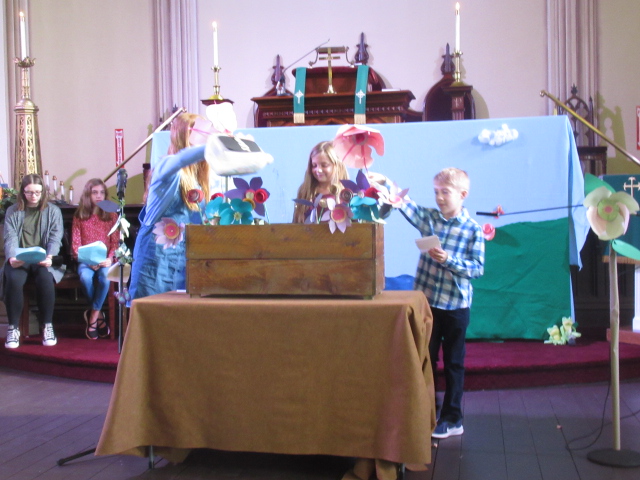 What a wonderful gift was given by the children of the Sunday School during last Sunday’s Stewardship worship service. Based upon an original production written by Susan Brosnihan using this year’s UCC Stewardship theme “Rooted in Love,” all of the children presented the dramatized story of “Seed and the Stewards of the Garden.”

Incorporating the foundational setting of the Garden of Eden, sad little Seed asks for God’s help to grow. The Stewards of the Garden — Earth, Rain and Sun — are called out to answer Seed’s prayer. But the results are mixed. One of the Earth stewards seems just too busy to help out little Seed. Fortunately another of the Earth stewards is happy to give Seed all the earth needed to give Seed a healthy blanket of soil to grow in.

Now what was needed was some water. But when one of the Rain stewards came by, she had a different use for all her water. She didn’t have much water to spare, so she only gave Seed a splattering of water. Not looking too good for little Seed. Fortunately another Rain steward came by and happily gave Seed all of the pure rainwater that Seed needed. Even when all of Rain’s water was used up, Rain wasn’t worried: “There’s more where that came from. God always finds a way!”

Finally it was time for the Sun to rise, bringing the light and warmth that Seed needed to grow to the fullest potential, a beautiful tree providing shade, shelter and food for all. Firmly rooted in LOVE. 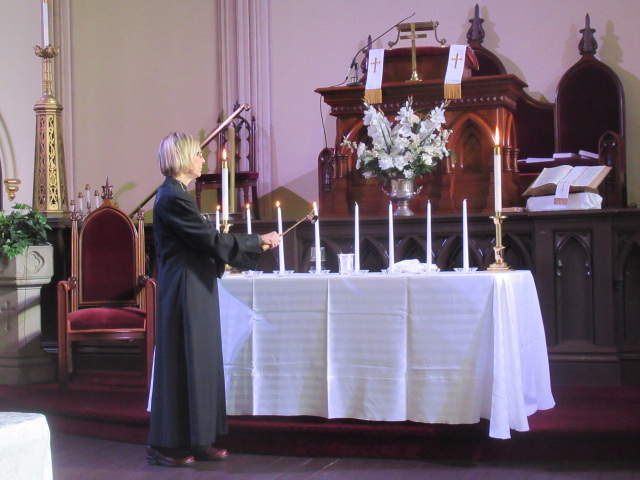 On Sunday, November 7th, First Congregational Church celebrated All Saints Day, through a service of remembrance for eight members of the church who had passed away since January 2019.  Rev. Deborah Breault lit a candle as each name was read,  and this was followed by the ringing of a chime.  Those members of our church family included:

Parishioners were then invited to light other candles in the sanctuary in memory of their own loved ones who have passed.

This special service also included a tribute to military Veterans, in anticipation of Veterans Day on November 11th.  Deacons read a moving poem which honored veterans, and members of the congregation recognized all veterans who were present. 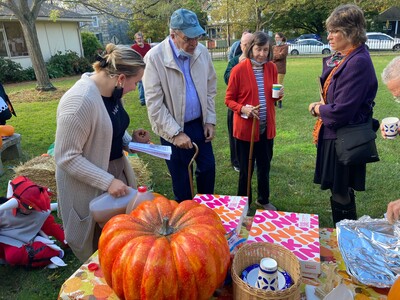 After worship last Sunday, October 31, the sun was shining, the children were dancing around the front lawn in their Halloween costumes, and everyone was enjoying the opportunity to visit and catch up, as well as the cider and donuts. The bright autumn foliage was swaying in the breeze and everyone was happy to just be together.

The start of the fall Stewardship campaign, with its focus this year on the phrase “Rooted in Love,” has brought everyone’s attention to the strong ties each of us develops through our loving church relationships. Whether through weekly worship, through Sunday School, through service on the Council, Board of Deacons, one of the church committees, Ecumenical Meals, the Coffee House, the Prayer Shawl Ministry, the Dolphin Ministry, or other ministries at FCC, every time we come together to do God’s work in the world, we are nurtured through the deepening faith that results when we are rooted in love. 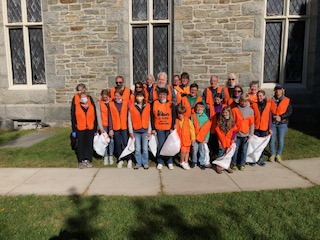 On Sunday morning, October 17th, two dozen FCC members, from first graders to seniors (and even one cute puppy dog), put on their orange service vests, said a prayer of thanks, and marched off with plastic garbage bags and gloves — ready to clean up the town.

“Church Has Left the Building” has been a project of the congregation for many years. In years past, we have done both indoor and outdoor projects. We have gone into local organizations to carry out requested projects, such as visiting Franklin Court to clean up their gardens or organize their library. This year, to keep everyone safe from COVID, we focused on outdoor projects. Under bright, sunny skies, with light breezes blowing the autumn foliage, teams of parishioners went to Independence Park, Rockwell Park, the Town Common and High Street to pick up every scrap of litter and every tossed beverage container we could find. After an hour, we gathered back at the church to tell the stories of our journeys and enjoy some refreshments. One group told of a kind householder who came out to offer freshly fried apple fritters. Yum!

Showing the love of Christ to our neighbors and our neighborhood is our mission, every day of the year. “The Church Has Left the Building” is one way that we show that love. We look forward to it every year. 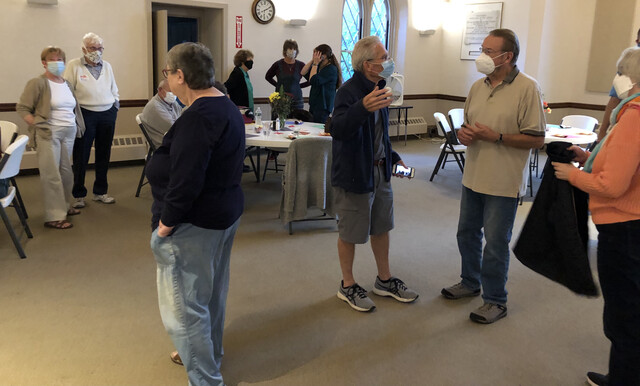 At a Potluck Supper on Friday, October 1, members of the congregation embarked on a journey to explore the past history of the First Congregational Church in Bristol, as a way to better focus our efforts on the present and plan for the future. FCC Bristol has played a central role in our community from its gathering in 1680. Back in the 17th c., a town could not be formed until there was a “settled pastor.” That condition was met in 1680 when Bristol’s first church was gathered. FCC was Bristol’s only church from 1680-1720. In a broad overview of the role that FCC has played in the history of our community, right up to the coming of our new pastor, Deborah Tate Breault, participants were able to better appreciate the core values of the church and its relationship to the greater community. This was followed by a small group deep dive into the strengths and “growing edges” of our most recent 5 pastorates. It also began a dialogue about how organizations deal with challenges from within and without, and what are the forward-looking intentions of the church family. We are planning a greater exploration of these central issues at future “Telling Our Stories” events. This initiative originated with Pastor Deborah and was sponsored by the Church Council. 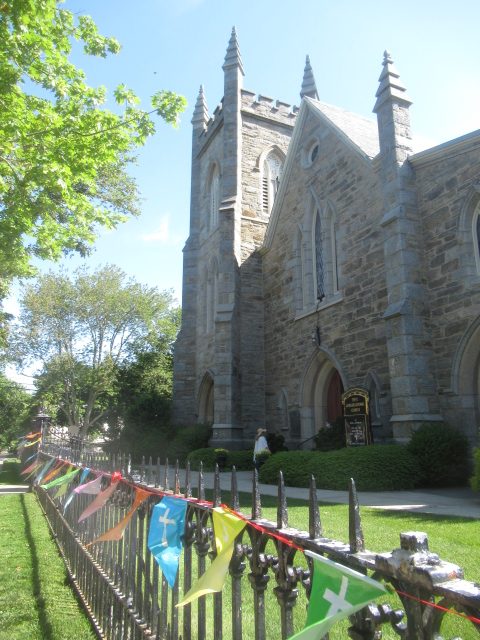 FCC Bristol launched a Capital Campaign on July 1 to raise substantial funding toward the restoration of the Gothic windows and the repair and painting of the plaster in the sanctuary. We invite every member and visitor to our church to make a pledge toward the restoration of our sanctuary — the beating heart of our church family. While our progress to date has been inspiring, we still have a long way to go.

In addition to the pledge commitments made by some members of the congregation and funding drawn from Endowment Fund earnings, a $10,000 grant award from the Felicia Fund, a family fund in Providence, RI, was received. Additional grants are being submitted to Rhode Island granting entities.

Pledges of any size are welcome and all pledges can be paid in over a 3 year period. If you have not yet made your pledge, we urge you to consider doing so. Our commitment to restoring our sanctuary will provide a more welcoming message to visitors and members alike and help keep our sanctuary at the center of our spiritual growth and fellowship. If you have any questions, feel free to contact Caroline Jacobus, Chair of Stewardship. 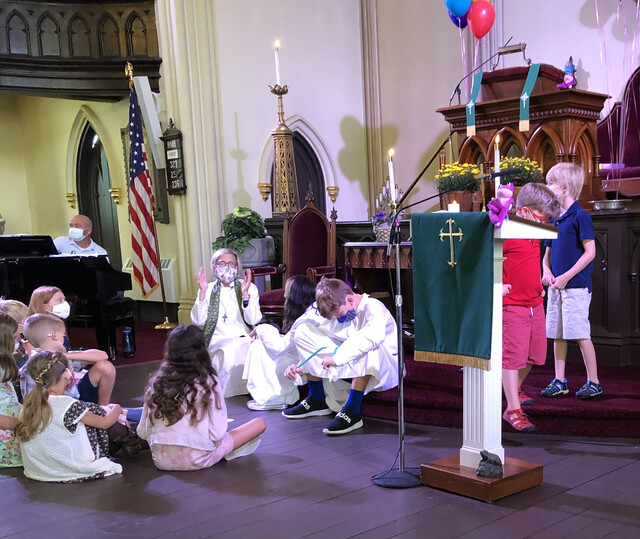 On Sunday, September 12, FCC held its intergenerational worship service welcoming all its children, families, and members to celebrate the kick-off of our FCC Sunday School Year! Balloons were flying over every pew, rainbow-colored frogs (more on that, below) were peaking out from the balcony, the pulpit, and every other hiding place as our students, teachers and members of the Christian Education Committee were commissioned to carry out the church school ministry with love, respect and a commitment to nurture our children and to seek Christ’s way of peace and justice for all. The Children’s Sermon focused on F.R.O.G. — “Fully rely on God” — as a way of meeting life’s challenges and encouraged the children to find as many of the frogs hiding in the sanctuary as they could. The service also included a commemoration of 9/11 and a sermon on the building blocks of the Christian Community, including among others: Love, Prayer, Courage, Jesus, and Awe. The service was followed by an an All-Church Picnic on the front lawn under sunny skies. 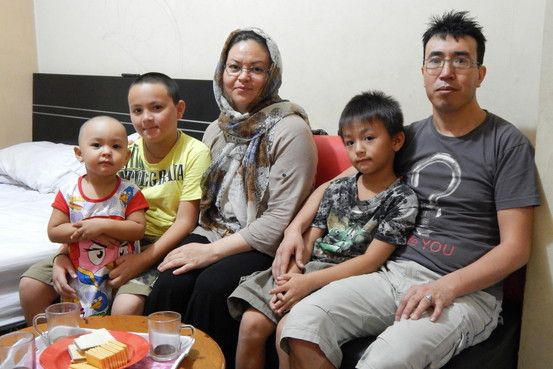 Since the first days of the evacuation of at-risk Afghan families and Americans in August to Naval Air Station Sigonella in Sicily, Italy, the Board of Deacons at FCC Bristol and members of the congregation have responded to the humanitarian needs of these refugees with donations of more than $1,600 toward the provision of personal and sanitary items. In doing so, they have sought to fulfill one of the important missions of our Christian faith and therefore of our church community to reach out and assist those whose lives have been upended by war, terrorism, and displacement. Deacons wish to thank all those who have contributed to this mission, which has now been closed.

Throughout these weeks, we have been working with volunteers to Operation Allies Refuge to help the thousands of refugees arriving at the Naval base in Sicily. We were fortunate to be able to work through the daughter of one of our Deacons, whose husband is stationed at NAS Sigonella, serving as a Navy Seabee. Members of military families in conjunction with the U.S.O. were volunteering their time, money, and energy to collect and purchase items needed by the evacuees.

Yours in Christ,
F.C.C.’s Board of Deacons

Just as the light began to fade in the sky last Saturday, we carried out the huge film screen and set it up on the lawn, followed by the chairs and the popcorn machine — which Susan Brosnihan lovingly cleaned and restored. We don’t often get the chance to see a film out in the open air — And with so many of good friends.

Then Bob Evans started the Looney Tunes cartoons and we were on our way! Bugs Bunny. Daffy Duck. Porky Pig. Elmer Fudd. Tweety. Sylvester. Wile E. Coyote. Bringing back memories for the oldsters among us. Before long, it was time for the feature film, which few of us, young or old, had ever seen and didn’t know what to expect: “Upside Down.” This is a fascinating film for all ages. By following the life of little Riley as she grows from a newborn to a toddler and a little girl, it explores how our emotions, memories, dreams, relationships, and lived experience form our personality and our ability to handle all the challenges that life throws at us. Heavy stuff, you say? This film uses bright, dynamic, zany and comic cartoon characters — Joy, Sadness, Anger and other emotions, to dramatize the inner life of this little girl and all of the other players in her life, showing both the sources of strength and weakness that interplay within each of us as we move through our lives. Most powerful for Riley were the loving relationships she and her parents had formed, helping her survive some of life’s most traumatic experiences. This is a film that can be appreciated on many levels and was definitely a big hit with the audience. 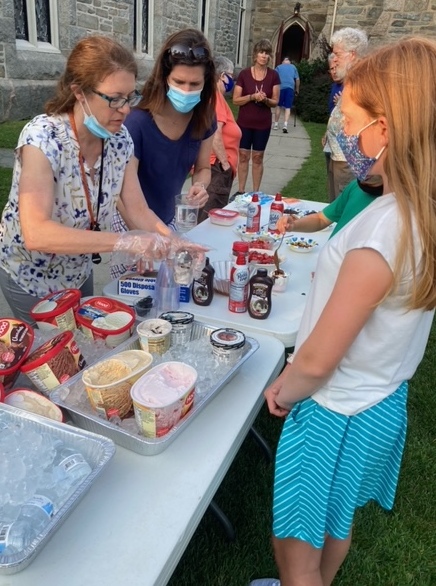 I got the chance to give Marina a big hug for the first time in 18 months. And she got the chance to ask me about my new grand-daughter. It was like that for everyone who came. The evening of August 11 found FCC members enjoying an Ice Cream Social hosted by the Christian Education Team. The weather was perfect, every mouthful was satisfying, and sharing news with friends filled the soul.